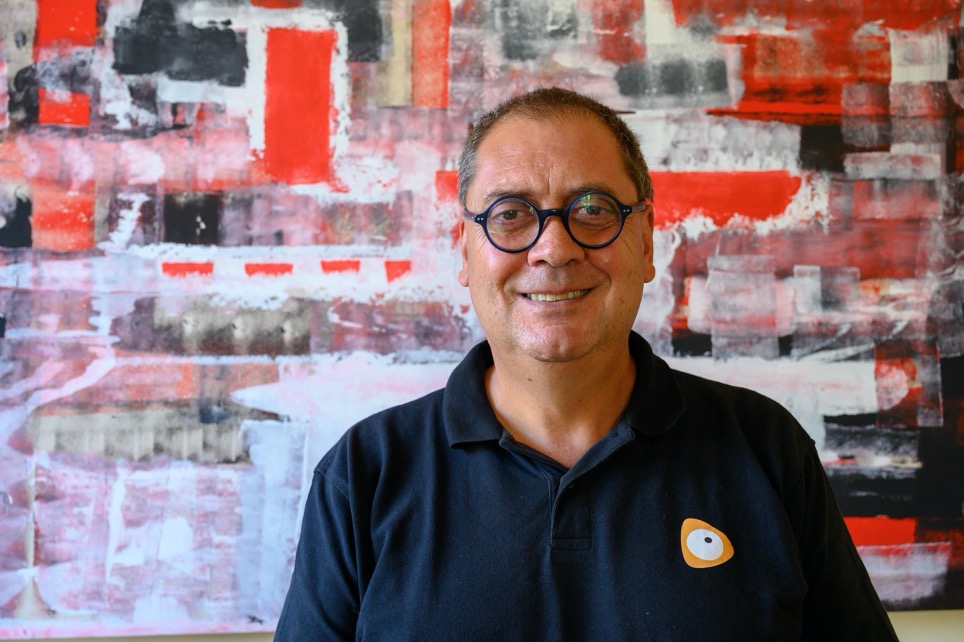 Interview with Stefano Bargagni, CEO of Cynny, start-up company founded in 2013. Known today as Cynny S.p.a., the company is the developer behind MorphCast, an interactive video platform that uses AI technology, which vows to redesign the advertising, training and content creation landscape.

We have the pleasure today of meeting Stefano Bargagni, the CEO of Cynny, a start-up company based in Florence that can be considered, by now, a reality of international IT development, thanks to MorphCast, the company’s most noteworthy product.

MorphCast is an ambitious and innovative project that has the primary goal of pushing AI towards increasingly unexplored and emotional places. It’s not by chance that MorphCast’s claim is the following: Emotional AI Interactive Video Platform. Are you curious about it? Well, don’t miss this interview, then!

Good morning, Stefano. First of all, thank you for your time. We had the pleasure of meeting the MorphCast, and we thought that such a groundbreaking project can’t be overlooked by our domestic and international readers. Let’s get started with the most classic of questions: what is MorphCast?

Just imagine a video that watches you back as you watch it and… reacts to your emotions! It adapts, it changes its plot, it rewinds, it skips forward, it slows down, it speeds up… In short: a film, a commercial, a training course, or any other type of multimedia content, can follow different paths based on the emotions, attention level, engagement and any other information that is written and “read” in real time on the viewer’s face. And it also respects your privacy, since it doesn’t keep private information that could be sent to a server.

MorphCast is a platform that allows you to do all of that so easily, that anyone can get into this new way of communication.

Well, this is not all it does. Actually, it’s also a great tool for creating classic interactive videos, that usually have many different buttons, a menu, links, etc., just like how Flash Player used to be, but MorphCast is available on all the latest browsers and it’s projected towards the future. 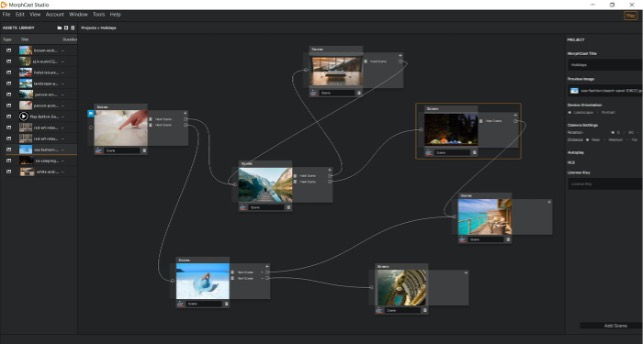 How important and commendable is the fact that an Italian company is carrying out an AI project? We’re used to seeing IT as a field dominated by the big American players… Is something changing in the innovation environment?

Technological innovation was born in Italy at a time when Americans didn’t exist yet. Florence birthed a good amount of creative geniuses whom enterprises have been benefitting the whole of humanity for centuries. Now that the geographical barriers have definitely been teared down thanks to the Internet, us moving on the road, the highway, the railroad and via plane is not necessary anymore to innovate. Technology doesn’t make a certain area more privileged than the others, nowadays it’s “democratic” from this standpoint. I think, this is what changed in the geography of innovation.

I hope that soon the economic geography would change as well, by nullifying the differences between geographical areas, so that everyone could have the same opportunities of financing the development of a tech business based on its merits and potential, and not on a niche local culture. Maybe even this barrier will be teared down thanks to the technology that, after the Internet, created another great global innovation called the Blockchain.

How and when was the idea of the MorphCast born? For how long was it in development? Granted that a project that works with and develops neural networks will never be fully finished.

MorphCast was born out of a natural and obvious perspective, at least for me: is it possible that the content consumed by billions of people every day has been the same for over 20 years? Same videos for everyone, advertisements that reduce creativity to focus on programmatic advertising, re-marketing, user tracking, etc.?

No, I couldn’t believe that, back in 2013, when I bet everything on the idea of a video that watches you as you watch it. From there, it took me many years, during which I stubbornly insisted and invested with many other partners and financing partners, to achieve this complex and exciting venture: the creation of a technological gem smaller than a PDF file, but that can reveal any micro-expression of your face, without infringement of privacy, and by piloting the content to show the user moment after moment during an AI-assisted interactive experience. And all of this is possible without needing to download and install anything, just like a web page.

Today, MorphCast is only a small part of what it will become in a few years, it’s a first planet in a constellation of a new interactive multimedia. We’ll be in for a wild ride once the market for it takes off.

The platform already has many case studies among the world’s most influential brands. We don’t mean to offend anyone, but what was your “favorite” collaboration, or the one that left you the most satisfied?

One of the most emblematic cases for us was probably the Rado Watches campaign created by 77Agency, and this is for a special reason: it showed us that the user isn’t afraid of turning the device’s camera on if it means living an innovative, fun and engaging experience.

But we were also happy in collaborating in the education field with, for example, the Sole 24 Business School, which has now taken its online courses on the MorphCast platform. 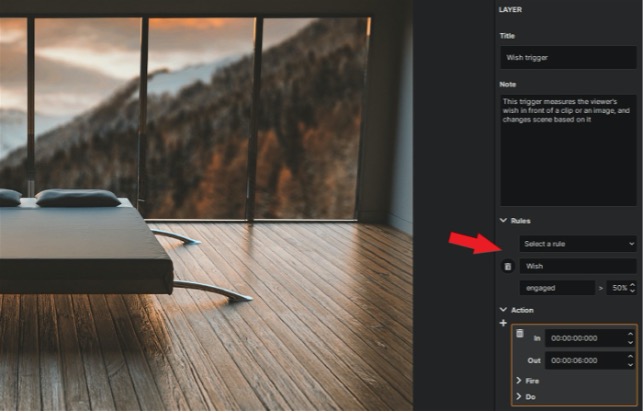 We had the chance to analyse the various fields in which MorphCast is available. Among those, we were impressed about the possibility of using the platform in the training field, especially at a time like this in which everything is inevitably done online. By adopting platforms such as yours, how could training potentially change?

Real-time communication platforms (RTC), Learning Management System tools (LMS) and virtual classroom platforms offer extremely advanced and maximal-flexibility features. A big limiting factor is emerging, though: today, these features don’t allow us to establish a “human connection” with the user, and this completely excludes the typical face-to-face dynamic between teacher and student.

When students are dealing with online lessons and exams, be it synchronous- or asynchronous-wise, MorphCast is able to recreate the dynamic of real life interaction, even in larger virtual classes, by contemporarily monitoring all of the students, their emotions, engagement and their behavior in general.

And all of this data, that is “seen” by the tutor in real time as layout graphics, can be used to interact with students one-on-one (ex: to explain once more an unclear passage, to reward the best students, and much more), or it can be memorized on other schools’ and companies’ platforms as a tool for optimizing the student’s education/training path, or to make the parents, the students and the teachers more aware of emotions and not only the notions, so that school will feel more “natural” even while learning at home.

MorphCast promises to change forever the way in which creators and experts approach web marketing campaigns. What’s your biggest bet?

When brands won’t be scared anymore of asking the public to turn the camera on without being afraid of getting accused of spying on their users the world of web communication will see a revolution, by not needing to use programmatic advertising, tracking and any other Big Brother-like technology, so that they’ll make way for effective and innocent technologies that engage the users, instead of tracking their behavior, and that, through the camera sensor, interact with the users’ emotions. Just like real life communication between people. This is a mission worth fighting for, until we’ll reach success.

Boring, but also inevitable, question incoming, considering that we’re living in a time in which user data protection is increasingly relevant: how important is the issue of privacy in the development of MorphCast?

Well, I think I already answered this question. Privacy deals with a person’s identity and behavior. Emotions are not private, since we express them in public via facial expressions, tone of the voice and the body’s physiognomy and language. 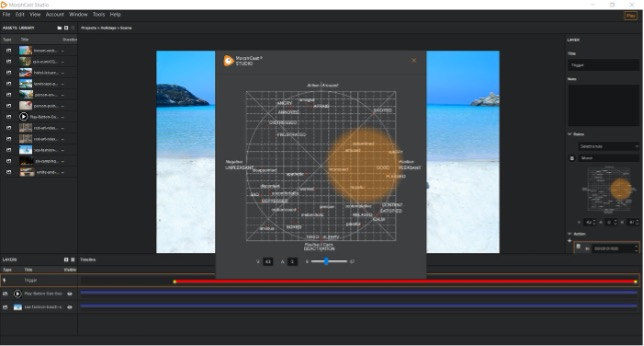 MorphCast is the concrete expression of our philosophy, which values freedom and freedom of movement without tracking. For example, it can customize advertisements without needing to know who you are and what you do in your life, also, it doesn’t store cookies in your devices or sell your personal data to companies and the like.

Since you leave us asking for more, what about your future projects and endeavors?

We’re constantly improving on the accuracy and the usability of our neural networks, but in the meantime we’re working on a neural network that can add to our model the possibility of analysing stress-levels, personality traits and soft skills so that we can measure the personal growth of, for example, people who engage in a training course, before and after the work experience. Thanks to international partnerships with other companies operating in this field, we’re sure that this could be valuable not only for the education environment, schools and companies, but also for those individuals who consume Internet content daily, so that they can get “suggestions” with a greater impact on their personal and professional growth.

How to Edit & Save Your Instagram Photos Without Posting
With regards to online media applications, Instagram has the best assortment of channels and impacts. With Instagram channels, even a beginner can alter photographs and take them to another level in only a couple of taps. Other than an assortment…