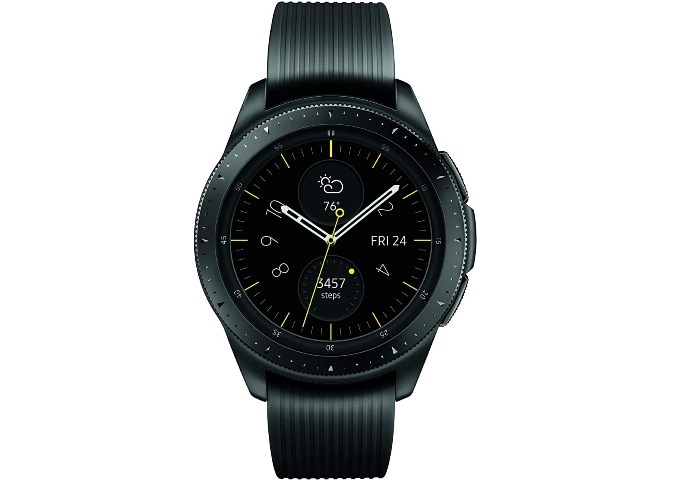 A 42mm, United States version named Midnight Black, one of a kind is a beautiful smartwatch. Galaxy Watch is a gadget that helps you live a smarter life, with everything literally at your hand. A bare Bluetooth connection makes you at hand with all the supported features and applications. It has compatibility with all devices having Bluetooth. It has stylish watch faces which are so realistic that they don’t even look like they are digital or just an image on a screen. Moreover, it is so easy to use and operate.

The battery of Galaxy Watch

The battery being it’s one of the main features, is long-lasting, can even go nonstop for days. Just on a single charge, it can go on for more than 2 days which obviously can vary. It has a 270 Milliamp Hours battery capacity. Battery life for the Bluetooth model ranges up to 96 hours. And for the LTE model, it can go for like 72 hours at max. The results may vary from phone to phone.

The Galaxy Watch supports all the features on the Samsung Galaxy phone series, but on other phones, it might not run with all the possible features. Other phones (Android) must have a minimum of OS 5.0 and RAM 1.5 GB. For the iPhone users must have a device with 9.0 iOS (all the phones including iPhone 5 and above are included).

These watches also come in two sizes. They also are available in 3 colors with detachable straps. 2 Additional Straps, a large and a small one, are given along with the watch. So, you can customize your watch. Other things in the box include a wireless charger and its adapter, a user manual along with a warranty card. The warranty card is only for the standard parts and labor.

The operating system in the watch is Tizen 4.0 which was the latest when they launched this product. Tizen is a flexible, very customizable, and an ingrown operating system. Besides that, its system on a chip, SoC blows away everyone. The Wear OS watches are like a couple of generations behind the apple watches. The build quality is quite good. It bears the shocks and avoids getting dents due to its hard screen glass and a steel back. The stainless-steel construction and the rotating bezel are inimitable. The front side of the rotating bezel is quite smooth to operate.

Other features which make this watch worth buying are as follows

This Galaxy Watch is pretty much something worth wearing anywhere. Back then, this Galaxy Watch was quite referred to as the best non-apple smartwatch in the market. When Samsung Galaxy Watch was launched, Samsung was struggling but they stepped up their game and provided a superior product to Apple, their rivals. We don’t think there was a better smartwatch available at that time. The next versions have a matured technology than this one but still, this product is a piece of art. Thanks, Samsung for providing us with a great watch.