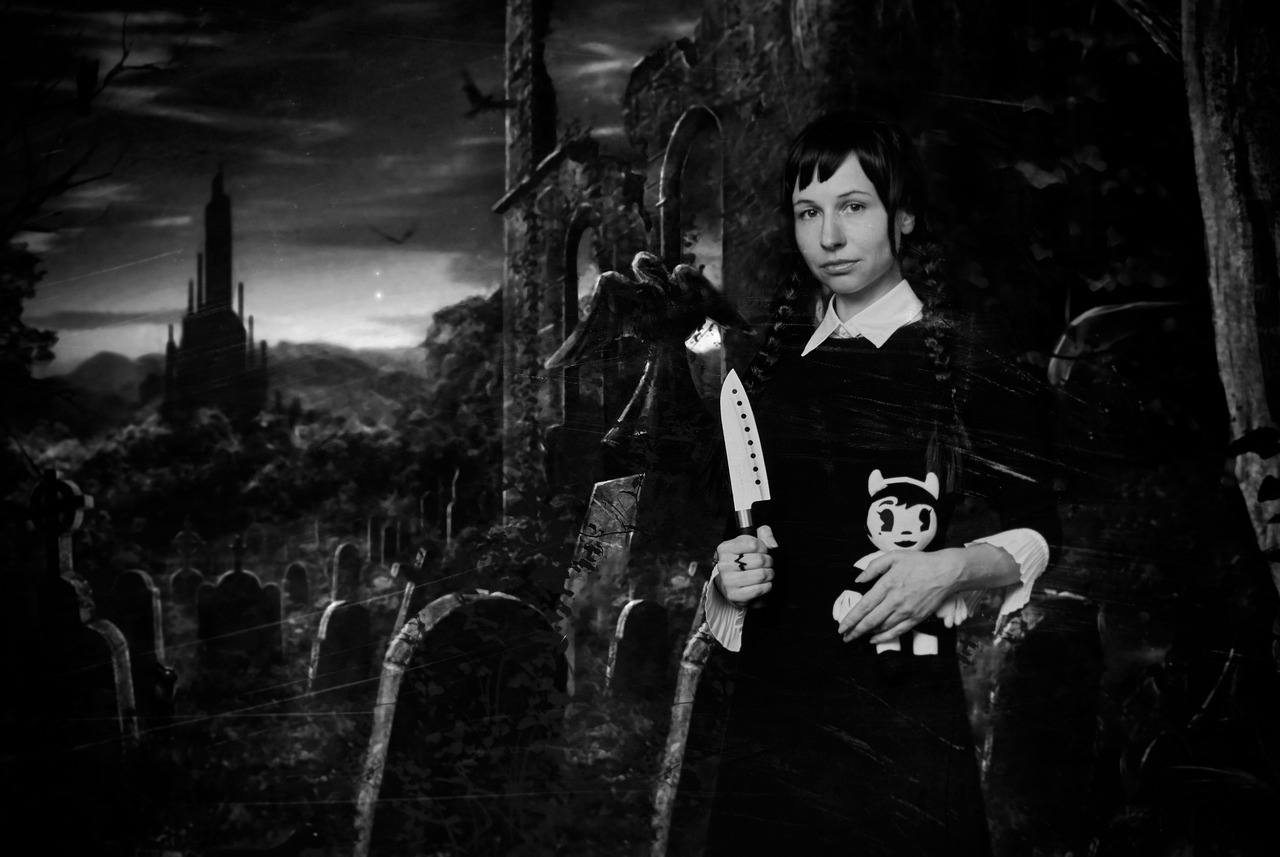 You may be wondering… But what series or movie is it? Well, it has to do with a peculiar family, especially with the daughter.

The first appearance of The Adams Family was in a comic published by The New Yorker around the 1933. And then was used to create the Addams Family Show in 1964 by the TV network ABC, this show had 64 chapters with a duration of 30 min each one. Filmed in black and white, from September 18, 1964, to April 8, 1966. Also, as a curious data, this series was the first adaptation of The Addams Family characters to include the famous signature tune.

In 1991 the first movie, The Addams Family, was released. The film tells the story of how after years of being lost, Uncle Fester returns, causing great joy in the family, not suspecting that an evil woman will take advantage of the confusion of the arrival to steal everything the family owns, including the house.

Then, in 1993, the second part, Addams Family Values, was released, in which, after the birth of the Addams’ third baby named Pubert, they hire a nanny, who is nothing more than a murderer who plans to kill Uncle Fester to keep his fortune.

And finally, in 1998 comes the third installment of this family with Addams Family Reunion. In this last film, the Addamses mistakenly end up at the family reunion of ordinary people, unleashing chaos with their strange habits. This third film was not as successful as expected, it is speculated that it was mainly because the actors who shot the film were not the same as in previous installments, and had a less successful gloomy look.

Additionally, also existed another TV series, called The New Addams Family, aired from October 1998 to August 1999. And it followed the titular character, Wednesday Addams. Now, the new installment continues to follow her as the main character with the premise of she will be enrolling in Nevermore Academy, a school where children with supernatural abilities can learn and hone their skills.

And the series we will see a Wednesday develops her psychic abilities, she meets other students and characters, in a few words she being a teenager. She is also seen participating in supernaturally themed school activities, stopping a monstrous killing spree, solving a murder mystery, and more while figuring out how to navigate her new relationships at the school.

Wednesday debuts at #1 on Netflix

The success of this series will be seen as a huge victory for Netflix. If you keep in mind, that has spent a lot of time and money in recent years creating original programming. The show tied for first place with Stranger Things in no less than 83 different countries during its first week. According to a calculation made by Netflix, roughly 50 million homes worldwide watched at least some of the series. This is very encouraging for Wednesday’s future.

Does this mean Wednesday is getting more seasons?

Do you think Netflix will renew Wednesday for another season? For me the answer will be yes, I hope not be wrong. While we wait for Netflix answer about to renew the show, check out “If You Loved Netflix’s Wednesday, You Should Watch these 10 Exhilarating Shows”.