Home » Vantablack, the darkest material on the planet

Vantablack, the darkest material on the planet 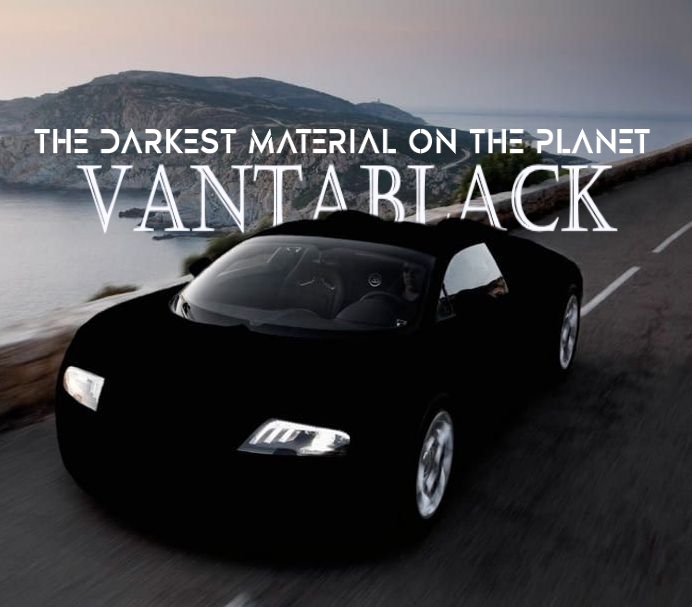 Have you ever imagined that there might be a surface so dark that it doesn’t reflect any ray of light, giving the feeling of a black, empty hole? Getting a product to have the purest, darkest black in the world was until recently impossible. But thanks to this new material called Vantablack, we will see buildings, works of art and endless objects as if they had turned off the lights.

It’s no longer just about imagination, since it was invented six years ago by British scientists and has given a lot to talk about. Getting the name Vantablack by its English acronym “Vertically Aligned NanoTube Arrays”, making it the darkest substance on the planet. It absorbs 99.96% of the light received and many people consider things covered or painted with this material to be like black holes even when exposed to direct light reflectors.

Vantablack is a material that due to its structure and composition acquires the darkest shade that has ever been seen. Vantablack should not be considered as a color, since when a material behaves in this way and maintains a total absence of light, it would be totally different from what a color is. This material, has the power to trap light rather than reflect it, where nanotubes divert it between them in order to absorb it and then dissipate it in the form of heat.

This substance despite having potentially multiple applications, such as preventing parasite light from entering the tubes or visual channel of telescopes, and as a consequence significantly improving the performance and result of cameras used both on Earth and in space. But mainly takes into account its use in art and even camouflage. Since at first glance the composition referred to as Vantablack, not only dazzles human vision (and many other animals) and gives the perception of “color” or not black (absence of all color) but by optical illusion is such magnitude of darkness that it suggests completely dark three-dimensional holes. Being applied on flat surfaces, an illusion is perceived as endless gaps, even if you aim with a laser, it will not emit any reflection. It is also used to dress people with cancer, to prevent solar radiation and skin contact. And it is currently being used in the coating of monuments in squares and parks for artistic and decorative purposes. It was also used as a test in BMW brand cars, which are not for sale because of the danger that will circulate on any road. In addition, very few people could afford a vehicle covered by Vantablack.

To perceive the depth of things, you need nuances and colors, which does not count the Vantablack and therefore we are unable to perceive it.

How many nanometers correspond to the black color?

Using logic, taking into account its definition, it would in fact be none of its own. In this sense, if a seemingly black object can show some wavelength (for example, when projecting a laser beam onto it) it has some color hue. Precisely this reaction is what we see that the Vantablack does not do, and for this reason the absence of nuances and colors makes us not able to perceive the depths existing in the object covered with Vantablack (which we would normally detail with lights, shadows and reliefs, that is, greater or lesser reflection of a color).

How does this happen?

It is thanks to its structure that it consists of carbon nanotubes (CNTs) and its diameter is that of an atom, and that is where its name comes from (Vertically Aligned Nanotube Array black). According to Surrey NanoSystems in a square centimeter there are more than 1 billion of these nanotubes, forming an array that absorbs the photons that make up the light and does not let them escape (i.e. it does not reflect it).  It’s the closest thing to a black hole, the company explains.

Of course the rays of light are continuously reflected but not on the surface but on the inside of the tubes bouncing from one to the other constantly (as if they played ping pong with each photon), until it is completely absorbed and converted into heat, which is driven towards the insides of the tubes until it dissipates. This makes it tolerant of temperature rises.

This peculiar structure results from a very complex and expensive process involving a lot of machinery, high temperatures and layers of different substances. The final product of which results in two possible ways of application (by vacuum and spray). It is very difficult to talk about costs because of how expensive it would be to acquire it (if possible). Steve Northam from Surrey NanoSystems told Mental Floss that most likely there are no materials that are more expensive than the Vantablack.

According to Steve Northam: “Yesterday I was asked how much a kilo of Vantablack “pigment” would cost. First, I can’t sell you a vantablack cube [it’s not a pigment or a painting], but if I could I don’t think there was much more on the planet that was more expensive.”

Coupled with this and despite the costly manufacture and production, the Vantablack is extremely susceptible to spoiling by touch. The reason that carbon nanotubes are so tiny causes them to collapse because of the weight that would oppose our touch.

Will we finally be able to see consumer objects with Vantablack?

On the web they already talk about its use in luxurious objects, so it is quite likely that we will find it in a special edition of some equipment or product (as is the case with smartphones with diamonds and so on), and in fact Northam has the conviction that one day we will see it in clothing. Although what will really be surprising, more than the darkness of black, will be the zeros on the label.

Nanoleaf Shapes, a new way to illuminate spaces
The Nanoleaf Shapes light boards are hexagon shaped tiles that associate together like custom unique pieces, pair to your voice collaborator of decision and give a solid portion of uproar to an exhausting work-from-home arrangement. With all their brilliance, the…

What is ubiquitous computing and how is it applied?
At present it is evident that technology is always connected, allowing to generate increasingly intelligent environments, capable of interacting with the human being naturally, simulating the perception of human reality represented by an information system, which involves the generation of…