Home » The Ocean Cleanup: the best technology to clean the oceans

The Ocean Cleanup: the best technology to clean the oceans 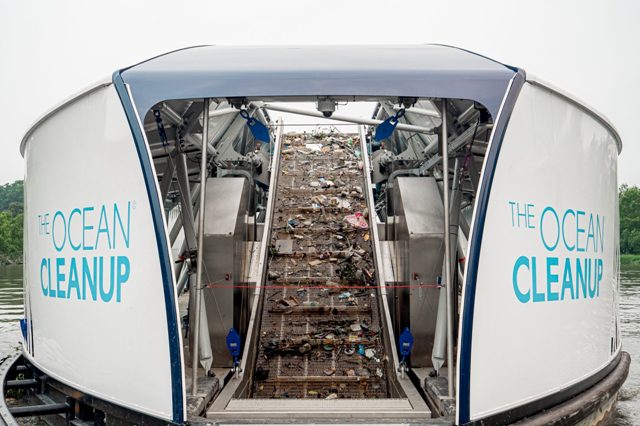 Every day the bodies of water on our planet receive huge amounts of waste, especially plastic. All these wastes represent a great danger to the marine ecosystem and to ourselves, that is why Ocean CleanUp arises.

What is The Ocean CleanUp?

The Ocean CleanUp is a non-profit organization dedicated to the research and development of methodologies that allow the cleaning of the oceans. It was created in 2013 by Boyan Slat, a Dutch-born inventor and entrepreneur who currently serves as the CEO.

This organization has developed floating systems or ocean cleaning vessels, which are already active and operating in the most critical points on the planet.

Currently there are more than five billion plastic objects found in the oceans, negatively altering the habitat of many species.

On average each year, millions of tons of plastic waste reach the oceans, of which 80% comes from rivers. Of these tons, a considerable part reaches what are called “ocean garbage patches” and is trapped in a vortex of ocean currents.

If nothing is done about the plastic that floods the seas, ecosystems, our health and the economy will suffer more and more.

The debris that reaches the oceans mainly accumulates in five “oceanic garbage patches”. The largest spot is the Great Pacific, located between California and Hawaii.

Solving this situation requires two main actions: cleaning the source from which the garbage comes, and cleaning what is already in the ocean.

The goal of The Ocean CleanUp is to clean 90% of all plastic garbage in the ocean, applying one of the best technological developments, and the collaboration of thousands of people.

How to clean up the garbage patches from the oceans?

Cleaning the Pacific blot alone using standard techniques would take thousands of years, and cost billions of dollars. With the technological development that allowed the creation of floating cleaning systems, 50% of the stain could be removed in five years, and at a small fraction of the cost. This is how the process works:

One of the main challenges when cleaning garbage vortexes is that plastic debris is dispersed over millions of square kilometers, in any direction.

With the technology applied to the boat manufactured by The Ocean CleanUp, the plastic is first collected or concentrated in order to be able to extract it effectively from the oceans.

The system consists of an extensive float that remains on the surface of the water, and a skirt that hangs below it. The float keeps the entire system afloat, and the skirt collects debris and carries it to the collection system.

Thanks to a line made of cork and located above the skirt, it remains afloat and does not exceed.

The natural forces of the ocean are harnessed

The cleaning system has been designed to work hand in hand with natural forces. This allows the boat to survive in the ocean environment which can be harsh at times.

The plastic like the barge, are transported by the effect of the wind, the current and the waves. But in order to capture plastic objects the cleaning system must travel a little slower, so a sea anchor is used.

By combining the marine anchor with the forces of nature, a drag is generated. This makes the boat move slower than the trash, and the system can catch it without problems.

Ocean CleanUp’s floating systems have been developed to catch oversized and tiny plastics. According to the projections made, by implementing the cleaning system on a large scale, it would be possible to sweep 50% of the Pacific slick in 5 years.

With the deployment of vessels in every ocean garbage vortex and cleaning up waste sources, it is projected to eliminate 90% of plastic garbage by the year 2040.

With the idea of ​​intercepting trash before it reaches the oceans, Ocean Cleanup has built the perfect scalable solution. This solution has been called the “Interceptor”.

Taking into account that 80% of the plastic waste found in the open sea comes from rivers, the organization has decided to work to eliminate the source of the problem. It has been determined that 1000 rivers around the world are the main sources of waste, and work is being done to clean them all.

Ocean Cleanup in conjunction with governments, private entities and volunteers, seeks to treat the 1000 rivers in five years.

The cleaning system called The Interceptor, is the solution created by Ocean Cleanup to treat rivers. It is the same system used in the oceans but scaled.

The Interceptor works completely with solar energy, collects plastic autonomously, and can work in rivers with the highest level of pollution.

The Interceptors will be placed in strategic locations along the rivers, to collect as much debris as possible and to allow normal navigation of the ships.

All the waste that flows with the current of the river, is carried by the barrier to the door of the Interceptor. The catamaran has a design that optimizes the flow of water so that it passes through the system, dragging all the plastic garbage to the conveyor belt.

Once the belt receives the waste, it extracts it from the water and carries it to the shuttle.

The shuttle automatically distributes the rubble into six containers. Each container has a sensor that allows them to be filled evenly, until reaching their maximum capacity.

Thanks to its 6 containers, the Interceptor has the capacity to hold 50 cubic meters of waste. This allows it to work in the most polluted rivers.

Once the Interceptor has been filled, the system sends a text message to the technical operators in the area, so that they can collect the compilation. The operators send the debris to the waste management facility, and return the barge with the containers to the Interceptor.

It has a design that allows its mass reproduction, and that can be used anywhere on the planet.

Trash enters the Interceptor thanks to the current of the rivers. Each of the electronic components of the system, such as the shuttle, the conveyor belt, the lights, the data transmission and the sensors, works with solar energy.

Each and every one of the interceptors is connected to the Internet. In this way, the Ocean CleanUp team can collect information on the activities of the cleaning systems. This also allows the Interceptor to notify operators when containers are full.

You can get more information about this organization and support them through their official website.

What is LiDAR technology and how does it work?
LiDAR (Light Detection And Ranging) technology is a massive position measurement system remotely, based on a laser scanning sensor (infrared spectral region) that emits pulses and records returns against the surface. When this sensor is located on an airplane or…

Ad game developer Samuele Sciacca offers outstanding free video courses on Youtube!
"You have no excuses: discover the potential of the Internet"! Thus, the youtuber Samuele Sciacca, in one of his latest videos, invites the many students to follow him with concentration to learn for free how to develop “advergame” video games,…